"One of the secrets to success
is ideas mixed with inspiration." 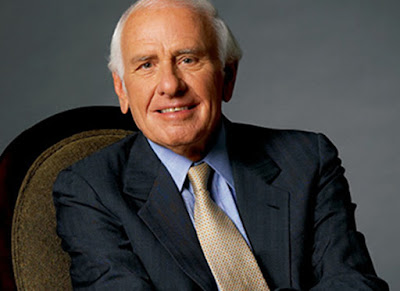 In sharing some of my mentors, one of the very first I ever called a mentor is Jim Rohn. He's another mentor that I never had the pleasure of meeting, but with whom I studied at length. I first 'met' him on a cassette tape of a talk to a group of multilevel marketers in Dallas, Texas in 1980. He inspired me like no other had and I started collecting his tape sets through Nightingale-Conant and his books and I listened over and over again.

His style was so inspiring and simple. He never complicated things but made things so easy to understand that a child could learn as much as any adult. It was like a sage grandfather talking to you with great little stories or parables borrowed here and there and refashioned just enough to have them come alive as never before.

Darren Hardy, publisher of Success Magazine has also been mentored directly and indirectly by Jim Rohn. He has done so much to see to it that Jim's messages continue to inspire for years to come. In a blog piece earlier this week, he was celebrating what would have been Jim's 85th birthday last Thursday, and he shared some brief thoughts about Jim and what Jim meant to him. He suggested we leave a comment about how Jim had touched his readers. Here is what I wrote:

"Three things come directly to my mind. Three, the parable of the talents story and not sitting on our laurels in safety, but getting out there with confidence. Two, the parable of the sower. One of the most important things in life is being. Sowing. Sharing. Put our seeds out there and whatever happens happens, and be good with that; however, no seeds, nothing happens. And my top number one lesson from my mentor Jim Rohn is the tale of the tallest building. I use this metaphor all the time. There are two ways to have the tallest building. One is to become known as a destroyer, and the other, a builder. Sometimes it is easy to take shots, to tear someone or something down thinking it will automatically make us more. What that makes us is a destroyer. I consciously choose to be a builder by focusing on what I can do to serve, what I can do to have things be better, and 3.5 as Jeffrey Gitomer might say is to have more, you need to be more. Work on yourself, not others. Work on, or rather play with, our own personal development.

Thank you, Darren, for all you have done to share Jim Rohn with the world. I stumbled across him on a cassette tape back in 1980. His shared thoughts are with me even today."

Jim always stated that he was an amateur when it came to the Bible, but he was being humble. He brought many of the parables in the New Testament and the stories in the Old Testament to life with renewed meaning applied to today. It was not lost on me. They are more solidly planted in my mind as a result of his sharing of them in such a special way.

I have learned so much from Jim Rohn that it would take a book to fill just a portion of it, and at the very top of that pile is the tale of the tallest building. Those who have read these Daily Inspirations for any length of time, know that I have used that analogy and philosophy many times. It has helped me to change from being a critical person to being a kind and gentler person, and to focus on me first and others after. I've spent most of my life in the business world and I've seen scores of destroyers at work, and Jim helped me learn to look at that in a more enlightened way.

The other part of the tale of the tallest building is that if I am to be a builder, which I have chosen to be, then I must actually build something. To keep bringing material to the work site day after day after day and never get going on the building is pure lunacy. I must begin with what I have and get going. Another mentor, Seth Godin calls that 'shipping.'

Jim is with me today more than he was in 1980 when I first heard his voice. He is part of who I am today. He is part of my philosophy. In fact, he taught me to even have a philosophy. And, it wasn't just business that he taught. It was as much about living as anything else. I am so grateful to Jim for all that he has taught, and all that he continues to teach by the blessings that he has left behind, and through the others, like Darren Hardy whom he touched deeply.


"When Somebody Shares, Everybody Wins." -- Jim Rohn

Spread Some Joy Today--To paraphrase Wayne Dyer, Don't die with your joy still in you.
Posted by Terry Minion at 5:30 AM