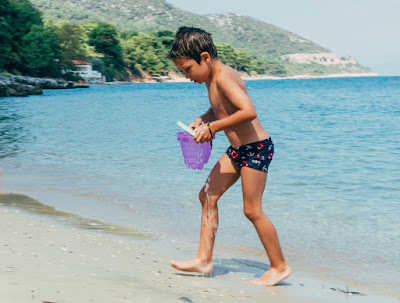 I was thinking this morning about how many of us tend to discount abundance, limit abundance, create rules about abundance in our minds. Abundance simply is. . . well, abundant.

Jim Rohn, one of my early mentors when I was in my thirties, says it this way: "Asking is the beginning of receiving. Make sure you don't go to the ocean with a teaspoon. At least take a bucket so the kids won't laugh at you!" Abundance is bigger than that ocean, but for our small eyes, the ocean seems pretty big.

The other day I saw a post on Facebook about how much money Joel Osteen makes and how expensive his home is and all this intimating that he is not a Christian and not a good person, and blah, blah, blah. We have so many ways of putting other people down and money is one of the easiest targets to use.

I used to put people down for that all the time. I would see some young person in a new fancy car and say that they must be a drug dealer. Of course, that may have been true, but that isn't the issue. The issue was my own sense of lack and seeing some abundance in another, my ego needed to justify my position versus theirs. Just as in the case with the Facebook post on Joel.

Here's an important quote from Abraham, Esther Hicks that speaks to this:

"As you set a financial goal, it is not only about the expansion for yourself; it's about the expansion of all of those who are involved in that which you are about. In other words, it creates this nucleus, this machine, that allows so many to begin to thrive along with you. It's much bigger than finances."

People cannot have any manner of abundance and not share it. Hoarding kills it. So, here's a more expansive way to look at this have and have not scenario: Look at that last two sentences in the Abraham quote again. "In other words, it creates this nucleus, this machine, that allows so many to begin to thrive along with you. It's much bigger than finances."

It pays us well to expand our view. Let's take some obvious examples from recent history. Steve Jobs. He was a billionaire, right? How many multi-millionaires did he create along his path? Let's take my earlier example of Joel Osteen. How many has he benefited financially and otherwise in his travels? Millions. Literally millions of people. I am one. I read one of his books. My early mentor, Jim Rohn. Benefited millions and is still benefiting millions long after his death in 2009. I have reaped so much from his teaching.

We could look at people who we judge as bad and find so much good if we chose to look for it. But, it is so easy for us to judge others and we always judge unfairly because we never ever will know all there is to know about them. This is the entire problem with the whole concept of judging others. Jesus had it right about the plank in our own eye focusing on the speck in the eye of the other.

Try this: Next time you see someone who is wealthy, has what we will call abundance, celebrate them. As Abraham said, they cannot be that without taking quite a number of others along with them, if not directly, certainly indirectly. Celebrate their success! Celebrate them going to the ocean with a big bucket even though we are so conservative with our teaspoon.

Spread Some Joy Today--by dipping into the abundance the Universe has supplied while celebrating the whole idea of abundance.
Posted by Terry Minion at 5:30 AM