"I'm at my strongest when I'm able to let go
when I suspend my beliefs as well as disbeliefs
and leave myself open to all possibilities.
That also seems to be when I'm able
to experience the most
internal clarity and synchronicities." 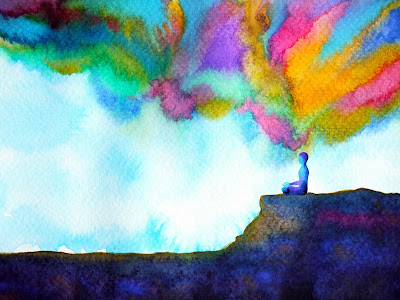 I just finished Anita Moojani's OUTSTANDING book, Dying To Be Me, for the second time, and it was even more powerful in the second reading for me. Here's a woman dealing with cancer for four years and is at the end stage with organs shut down and has a near-death experience that causes her to not only come back from death but to do it so quickly that the medical teams could not believe it was possible. Not only could they not believe it, but they also refused to accept it and gave her chemo drugs for weeks after they knew there was no cancer there.

You'll have to read the story and her revelations after, but what I wanted to point out about this is that the medical team has rejected the idea of miracles for so long that they couldn't believe in one--even when it was right in front of their eyes. As Einstein said, "There are only two ways to live your life. One is as though nothing is a miracle. The other is as though everything is a miracle." Anything is possible to those who believe in possibilities.

Though the doctors are looking on the inside, it is not in the way that Anita explains when she said, "I believe that the greatest truths of the universe don't lie outside, in the study of the stars and the planets. They lie deep within us, in the magnificence of our heart, mind, and soul. Until we understand what is within, we can't understand what is without."

She explains it another way: "Words taken literally or held as ultimate truth can keep us stagnant and stuck, holding on to old ideologies. I now know that everything I need is already contained within me and is completely accessible if I allow myself to open up to what I sense is true for me. . and the same is true for you."

We are far more powerful than we realize when we connect to the miracles all around us.


Look Around In Awe Today At All The Miracles.

Spread Some Joy Today--See your life full of joy and it will be just that.
Posted by Terry Minion at 5:30 AM