"Do we have to stare death in the face
to make us stand up and confront Resistance?" 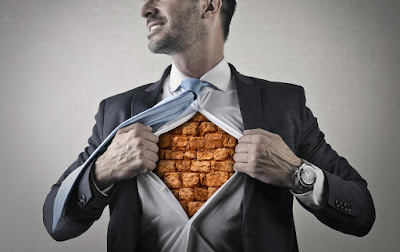 Steven Pressfield wrote a book all about Resistance (he uses the capital 'R') titled, The War of Art: Break Through the Blocks & Win Your Inner Creative Battles. I have read it, and there is much that I agree with and that resonates with me about what Resistance is and how it can feel like a power. Another way to express Resistance is in defining the ego--or, is that Ego?

The premise is to recognize the Resistance and to power through it because Resistance is holding you back and where you really want to be is over there, so bust through and get over there.

He also recognizes that Resistance is purely an internal struggle to stay safe, secure, unchangeable. Yet the Resistance is disguising what we really want as too much work, unattainable, unpredictable, by guiding us back to our comfort zone where life is uncomplicated and familiar. In other words, it is fear.

Powering through is one way to get it done, and it is a popular notion throughout literature and stories, fighting the good fight over evil and all of that stuff. Yet that way through is only for the truly brave and courageous. There may be a way for the rest of us.

This is just my opinion, but if you think about the whole idea of resistance, the opposite of that is not bravery or courage or power. It is acceptance. Another way to say that is to release. We might sometimes think of acceptance is 'taking up,' and that to release is 'letting go of,' yet acceptance to me is really letting go of resistance, so release and acceptance are the same, or that release is the idea, and acceptance is the action of release. By accepting, we release the resistance while recognizing its only power is in the struggle against it.

Try it for yourself. As you go through your day and you encounter resistance in its many forms and names, try recognizing it as resistance, accepting it as resistance, and thereby release any struggle against it. Allow it to be what it is and that it has no more power over you than you are willing to give it by your struggle. No struggle, no power. And, it didn't require a bit of courage, bravery or strength.


The Weakest Among Us Has As Much Power As Is Needed. Hint: It Doesn't Require Power. It Only Requires Perspective.

Spread Some Joy Today--Let go, let God, ENJOY the journey.
Posted by Terry Minion at 5:30 AM