"For it is in giving
that we receive." 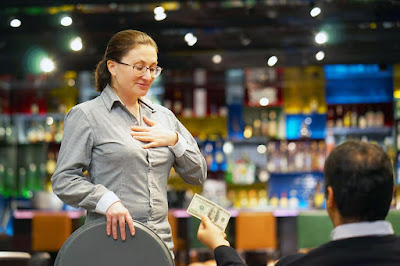 I was caught over tipping the other day. I don't think most usually notice, except, of course, the waiter or waitress and me. So, to answer curiosity, I explained a little why I did that.

It's a little hard to explain, only because I have a lot of reasons for doing it and I became a good tipper in my early twenties because my first wife worked for a number of inexpensive restaurants where tips were usually in coins. We would count them each night and put them in rolls.

It wasn't much of a job when it comes to compensation and the work was hard and required a lot of patience and endurance too. Back then, if someone tipped 10% that was special and anything more was quite remarkable. I learned how to become at least a 20 percenter because I remember those days very well.

The over tipping began later, several years ago. I think my main motivation was to bring joy to the waiter or waitress. The other thing was that it caused me to feel generous and richer than I was in reality.

I remember a funny movie called, My Blue Heaven, where Vinny, the lead character played by Steve Martin over tipped everyone and even tipped people that normally don't get tips--like FBI agents. He said that he had this whole philosophy on over tipping and was going to write a book about that and his life. The movie is a bit of a romp, but I loved that philosophy about tipping.

The other day getting caught, it was an $18 bill and I tipped $10. But, you know, the food was excellent, the service was excellent, and it was a stupid bargain with all of that, and besides, I love to spread joy. Do you think the waitress was joyous about that tip? I'm certain of it, but it might be true that it brought me more joy to give it and for her to receive it.

When I see a check, I take the total times two so that I know what the absolute minimum is, then I give what is in my heart to give. Who knows? It could be anything because I have developed a wonderful habit of over tipping.


"The Wise Man Does Not Lay Up His Own Treasures. The More He Gives To Others, The More He Has For His Own." -- Lao Tzu

Spread Some Joy Today--Follow your heart, not your head.
Posted by Terry Minion at 5:30 AM