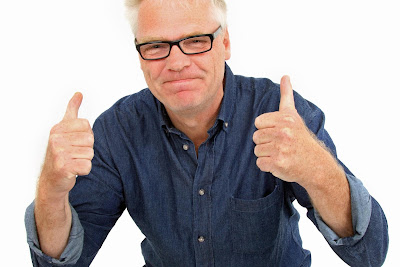 Common conversation at work and at home much of the time amounts to discussing those people and systems (groups of people) that do it wrong and if they would just take a few minutes and pay attention, we could set them on the straight and narrow path to doing it well. Then we could praise them--after the probation period, of course.

I must say that I have been doing this for so many years that I feel like I have an advanced degree in the field of complaining how poorly some people do things. It's amazing they grew up to be adults. Sometimes, I might have spent several hours in a day doing this at work with selected associates and then going home and telling my wife about all the stupid decisions and irrational behaviors I experience from other people all day that day. Of course, I knew so much better and even stated how it should have been and how much better that would be for everyone involved.

We all have 20/20 hindsight, don't we? Being critical of what other people say and do is one of the easiest career choices. It doesn't pay very well for most, but many, as I did, made a career out of it.

Of course, hearing criticism of what I was doing would put me into wartime defense mode. I would even prepare long defensive plans in my head on the pretense that I would someday need to utilize them. That's commonly called justification. I could have won awards in that career field. I graduated from advanced justification just short of indignant righteousness. I was about to start my own faultfinding firm called Shuda Engineering . . . and then it happened. . .

I read a book and it helped open my mind to a different way; a way that would not only have better results but help me to feel better, because the other way, though I was certainly justified, I always felt crappy and even depressed about a lot of things. Okay, well. . . it was most things. The world, after all, was sooooooo screwed up, you know.

The book? It was called Power In Praise by Merlin Carothers. At the time, I was going to church and I had read the Bible twice and I wasn't really into it all. I heard a lot of Shuda Engineering sermons and frankly, I was dismayed, confused and affected negatively. Then I read the book and it had me looking at things completely differently. I did a 180 as they say. That book led me to several other books in time that would take me to another level where I think about and participate so very little in Shuda Engineering.

Now I look at someone doing something and I say to myself, "Wow. That's interesting! I never would have thought of doing it that way, but you know, it is certainly a way. Heckfire, it might even produce desired results. I'm always on the lookout for better ways." Well. . . there might be just a shade of sarcasm there, but the Shuda Engineering contract has expired, so I'm in recovery. Doing well too!

Now, I'm doing some graduate work at Prazen U. Things are looking pretty good there. It is a whole different outlook. More and more enlightened people are attending. The campus is busting with joy-seekers. I've never heard more encouragement in my entire life as I've heard in my short time at Prazen U. I find myself noticing and speaking about all the right instead of the left. It is such a party changing experience. I can't recommend this course enough. One of the books I have enjoyed much here at Prazen U is The Gratitude Effect by Dr. John Demartini. He has taught much of the faculty at Prazen U and is a guest lecturer from time to time.

Spread Some Joy Today--Praise, according to Webster's dictionary, means to extol, laud, honor, acclaim, express approval. To praise, then, is to give positive affirmation, expressing our approval of something or someone. Go extol, laud, honor, acclaim, and express approval today. I guarantee a joyful experience for both of you.
Posted by Terry Minion at 5:30 AM