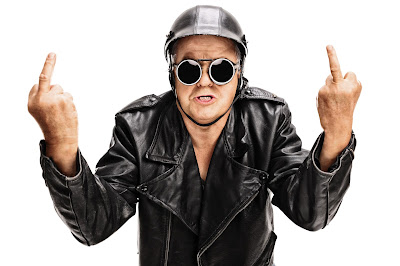 I was privy to some melodrama yesterday at the bank. I was fascinated with it, being completely outside of it looking in.

There was this older guy on a very cool motorcycle. There was a girl on the back. I saw them go by as I was walking Charlie and his pipes were gloriously loud and 'poppy,' which I'm sure was much to the owner's pleasure. He had a scarf over his face to protect himself from the wind as he must have been on the freeway earlier or something. It was about 71 degrees, not cold at all.

He went on and on yelling something about the car coming right at him and mother-f-ing this and mother-f-ing that and dah, dah, dah-dah, dah. So the car moved down toward me and I saw who it was. She is also very pregnant with her first child, not too far from the time. The motorcycle had turned around and stopped her almost in front of my truck, doing some more mother-f-ing and dah, dah, dah-dahing. I couldn't hear a word if there were any from the driver of the car, but I'm guessing there were defensive notes if nothing else. She was really under attack.

The motorcycle moved along and there was a security guard nearby and he decided to do some more dah, dah, dah-dahing to him. As the woman got out of her car, and as I was driving out, she was yelling at the guard to get his license number. She was also visibly upset and angry.

So, here's a perfect example of anger management, or rather, the lack of anger management that goes on all around us every single day. Sometimes we hear it, sometimes they are in their vehicle cussing us or someone without that noise escaping the vehicle. Many, many, many, more times, it is people swearing in their thoughts not vocalizing anything but visibly they are obviously distressed.

For what? Did anything damaging really happen? No. No one was hurt or injured, no ambulances were called, no police cars breaking it up, just one angry biker causing someone who may or may not have done something inappropriate to become defensive and then exercise her right to be angry back. Anger for anger. Dust to dust. Fear for fear.

The only place anything happened was in his head, affecting his rider's head, defensively exciting the pregnant woman's head, affecting physically her baby's head, affecting the guard's head, then of course, I was watching this amazed at all of this affection, and who knows who else was close enough to witness this. It was over the top and it was also absolutely unnecessary. The anger didn't help anything, but it infected everything. There was no resolution, only carrying anger away and stuffing it and saving the remnants of it for another encounter of justified release.

Here's a great question to ponder: How easily do you turn to anger in offense or defense? How long do you hang on to it? How many people do you tell about how inappropriate that situation or that person was?

But, here's a better question on your self-development journey: How fast do you realize that you're angry and recover to peace by letting the whole event go? This has been the key for me. I would go to anger in detail and even drag it into depression in my justification of my righteousness. Now, I let it go. I lay down the rope. I stop resisting. Yes, I feel anger, but a dinky amount in comparison with my past, and as soon as I recognize it is happening, I begin visibly in my head laying down that rope, and finding peace and well-being.


That, My Friends, Is Progress!

Spread Some Joy Today--regardless if there is anger all around you. Plug into the feelings you would rather have!
Posted by Terry Minion at 5:30 AM