"Gratitude bestows reverence,
allowing us to encounter everyday epiphanies,
those transcendent moments of awe
that change forever
how we experience life. . . and the world." 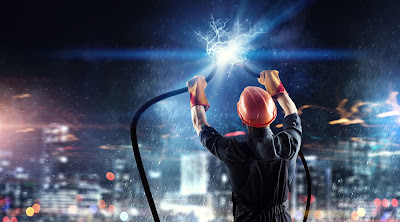 Whether you believe that humans have been around for a few thousand years, tens of thousands, or millions of years, any of those choices are old. As of 2014 in the United States, life expectancy in round numbers was 76 for the male and 81 for the female. That's a lot of lifetimes to consider in the time of human recognition on the planet. Which makes the discovery and learning to make use of electricity such an amazing thing in time.

We take it for granted generally in our world today. It has been around all of our lives, and probably the only time we even think about it is when the power goes off for whatever reason. And, we all know that it does from time to time, although we all know it is rare.

What's even more amazing is how little that time frame is as compared to human time. For all intent and purposes, the electricity that we know today and use every day came about only about 1.3 lifetimes ago or about 100 years.

Even with this, there were so many rural locations who didn't have power in the 1950s and 60's. Not very long ago at all. That had more to do with distribution it would seem; however, the real reason was a closed mind on behalf of the power generation controllers. They didn't think it was profitable. Once they were convinced it was and changed their mindset, more rural locations got their much-wanted power too.

So today is a wonderful day to celebrate electricity. By the way, it is good to remember that electricity has been around since the dawn of time, let alone the dawn of human existence. It was only waiting around patiently for humans to 'discover' it and make use of it.

Consider how many ways you use electricity and how your life would change in a major way if it were missing. Celebrate not only the 'invention' of electricity, electric tools, motors, and appliances, but take a moment to be grateful for those who made it work for us by making it so available to all the people who invented, marketed, and distributed the many products we have all around us in our lives today.

Spread Some Joy Today--by feeling the joy that comes from opening your worldview to be inclusive instead of exclusive.
Posted by Terry Minion at 7:23 AM