"Comparison need not be competition." 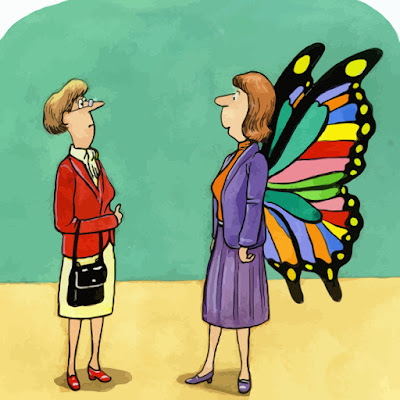 It doesn't matter, unless you make it so.

I was wandering around my office/library/entertainment room/music room this morning thinking for ideas to write about. I was looking at a series of music cassette racks that have been mounted on my wall since about 1988. Quite a number of the 150+ cassettes there were songs that I wrote and recorded. Many of them are not so good, but at the time I created them they were great.

When I began writing and recording songs in late 1983, even the very first recordings were so moving to me that I listened to them over and over again. I was inspired to try different things, to write better, to record better, to play instruments better. One of my coworkers encouraged me at every listen, and I couldn't wait to play him the latest improvements.

Of course, fast forward to 2016, 30+ years later, and I can easily see how these early recordings were not very good and could easily be improved, but that can happen at any stage for anyone. In 1984-5, I hired musicians to play on an album I recorded. Talk about improvement! Wow. What a difference skill makes! Yet, all of these musicians could have been improved by someone more skilled and with more experience. But, it just doesn't matter in the end. Whatever it is, it is. Whatever it was, it was. Whatever will be, will be.

Whether it is looking at my early writing, songwriting, recording, teaching skills, learning--whatever I have done or will do can be improved. But should that idea negate the accomplishments that went before? It doesn't need to. The only time that it matters is when we are thinking competitively. Who's better than whom? Which team won? Which of my children is the smartest? Looking at the opinions of others as a judgment criteria for our own creations is opening the floodgate of criticism. Best to keep that gate closed as much as possible.

Do you suppose Rembrandt had an early period where his work was not so good? Or Leonardo Da Vinci? Paul McCartney? Well, yes and no. And both of those decisions belong to the creator, not the critic.

Being open to improvement and accepting help or suggestion is great and can be really encouraging and inspiring, but letting someone else be a critic is not. Stand as tall in your kindergarten days as your post graduate Ph.D., travels.


It's All Good. Let It Be. The Journey Is Ahead.

Spread Some Joy Today--by loving what you've accomplished and finding joy in all that you do by not comparing yourself to another.
Posted by Terry Minion at 9:43 AM