"To grow
or not to grow.
What a great question." 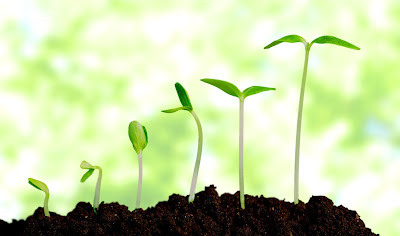 Until two months ago, I have never had someone mow my lawn, edge, trim bushes, pull weeds, and other yard maintenance. I've always done it, but now it is much harder for me to do, and I've never really enjoyed doing it anyway. So, I hired a guy that was doing some work next door to do all of that for me.

He is from Mexico and I instantly loved him. He has such joy about him. He smiles a lot, seems appreciative, almost like he's having fun doing what he does. His work is excellent, and I am thrilled to have him.

There is one issue though. He is not fluent in English.

I can imagine myself moving to Mexico, getting a job, or going into business and not speaking fluent Spanish. I imagine that it would be torture for me to only speak and understand a little while trying to do well. I imagined that this was the case with my new gardener too.

I wanted him to do something different by taking out my front lawn (well, it used to be a lawn before this long California drought), and putting in plants and some design elements. They call is xeriscaping--take out the water guzzling grass and add some far less thirsty hardy plants.

As I was trying to describe what I was thinking, he just didn't understand what I was talking about. So we arranged for him to bring an interpreter. He brought his cute little hipster of a daughter to translate.

I said to her to translate that I would like to help him grow his business if he was interested in that, and that the number one thing on the menu would be to become fluent in English, or he would be limiting himself to mostly Spanish-speaking clients. He said to me that most of his clients are English-speaking. But, I'm not so sure since the next door and across the street customers speak Spanish.

But, he's still limiting his business because he just does the same things: mow the lawn, edge the lawn, trim the ivy, use the leaf blower. He now does the next door neighbor's house, my house and a new job across the street, but I am the only one asking for more and paying him more.

I could give you the whole conversation and how we came to an agreement to take out the lawn and do some landscape design, but the one point that stood out to me was how he was thinking that he's doing okay without learning English better.

That caused me to think of how we all may find ways to just get by when what we really want deep down is so much more. It's kind of a way of settling, of seeing compromise as success. Knowing what I know from so many years of business, I cannot imagine going to Mexico and obviously dealing with Mexican clients and not being fluent in Spanish. I might not be there in the beginning, but I can assure you that I would make that my top priority.

This caused me to wonder if I am settling in anything or things today. It's okay to desire less, to be satisfied fully with less, but it is a very different matter to want more and then begin to accept less and get used to it by not paying attention to the bigger picture.

Spread Some Joy Today--by releasing those heavy thoughts. Lighten up!
Posted by Terry Minion at 7:26 AM